Twitter, a popular social media, or micro-blogging, site, allows users to post information, updates, opinions, etc., using tweets. Given its wide-spread popularity for immediately sharing thoughts and ideas, adversaries try to manipulate the micro-blogging platform and propagate off topic content for their selfish motives. Compounding the issue, as the popularity increases around a certain event, more people tweet about the topic, thereby increasing its “trending” rate. Spammers then exploit these popular, trending Twitter topics to spread their own agendas by posting tweets containing keywords and hash-tags of the trending topic along with their misleading content. Ideally, one would like to be able to identify anomalous tweets on a trending topic that have the potential to mislead the population, or even possibly cause further harm. Currently, Twitter allows users to report spam, and after an investigation, an account can be suspended. However, suspending a spam account is not an efficient technique to deal with spam related to trending topics because the suspension process is slow, and the trending topics usually last for only a few hours or a day at most. Therefore, the focus of the anomaly detection on trending topics in this work is on the detection of tweets containing spam, instead of detecting spam accounts.

One of the more malicious activities involves a spammer who includes a URL in the tweet, leading the reader to a completely unrelated website. It is reported that 90% of anomalous tweets contain unrelated or misleading URLs. People use shortened URLs or links in their tweet because of the limited number of characters (280) available in the tweet. Since it is common for tweets to include shortened text, so as to fit within the character limits, spammers can conceal their unrelated/malicious links with shortened URLs. Hence, the problem with shortened URL is that users do not know what is the actual domain until the link is clicked. The existing approaches for spam detection on Twitter use various machine learning tools on user-based features (e.g., number of followers, number of tweets, age of the user account, number of tweets posted per day or per week, etc.) and content-based features (e.g., number of hashtags, mentions, URL, likes, etc.). Though user and content based features can be extracted efficiently, an issue is that these features can also be fabricated easily by the spammer. However, being able to hide an inconsistency between the topic of a tweet and the topic of the document referred by URLs in the tweet is much harder.

In this research, we propose an unsupervised, two-step, graph-based approach to detect anomalous tweets on trending topics:

Using the above mentioned 2-step approach, we aim to detect the following types of spam/anomalies in trending tweets that are consistent with the spam scenarios listed by Twitter.

To verify our approach, we collect tweets (containing URLs) related to two separate (and very different) trending topics during the summer of 2018: FIFA World Cup and NATO Summit. We then construct graphs using information from the tweet text and the document referred inside the tweet, followed by using a graph-based anomaly detection tool. We then compare the performance of our proposed approach with several existing approaches to show the effectiveness of a graph-based approach.

Our graph-based approach has superior performance in terms of recall and F1-score to that of existing baseline approaches. Graphs provide a powerful machinery for eectively capturing the long-range correlations among interdependent data objects/entities. 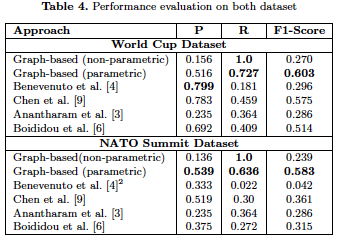